COVID 19 can spread through healthcare settings 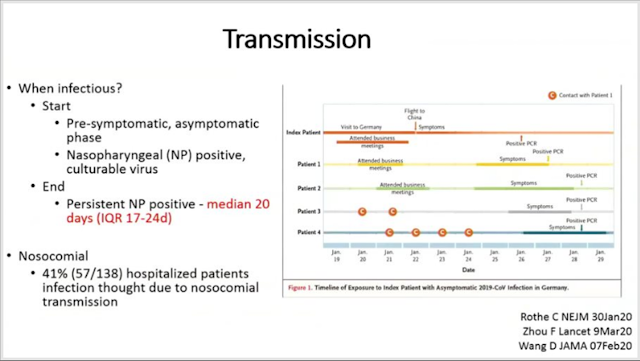 NIH: The SARS COV 2 virus is stable for several hours to days in aerosols and on surfaces, according to a new study from National Institutes of Health, CDC, UCLA and Princeton University scientists in The New England Journal of Medicine.
The virus  was detectable in aerosols for up to three hours, up to four hours on copper, up to 24 hours on cardboard and up to two to three days on plastic and stainless steel. The results suggests that people may acquire the virus through the air and after touching contaminated objects.
SARS-CoV-1 is the human coronavirus most closely related to SARS-CoV-2. In the stability study the two viruses behaved similarly, which unfortunately fails to explain why COVID-19 has become a much larger outbreak.
The NIH study attempted to mimic virus being deposited from an infected person onto everyday surfaces in a household or hospital setting, such as through coughing or touching objects. The scientists then investigated how long the virus remained infectious on these surfaces.
The scientists highlighted additional observations from their study:
The findings affirm
N van Doremalen, et al. Aerosol and surface stability of HCoV-19 (SARS-CoV-2) compared to SARS-CoV-1. The New England Journal of Medicine. DOI: 10.1056/NEJMc2004973 (2020).